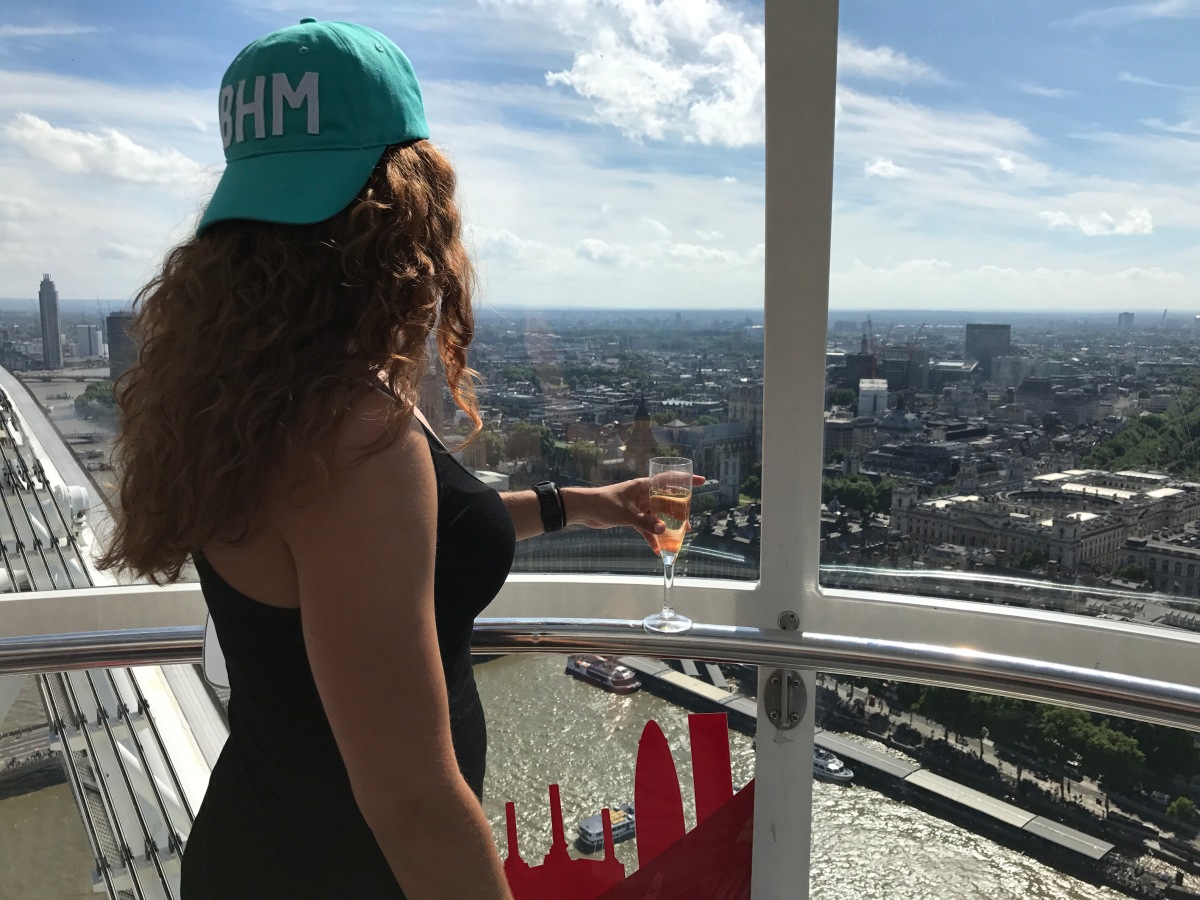 I was going to wait until I returned to my 100 sq ft hotel room outside Gatwick to write this post, but then I just kept thinking that I’m already going to unintentionally leave out parts of this amazing day, so why not use the 30 minute express train ride from London to Gatwick to at least try to begin to fill you in on everything I packed into the 8 hours I had in my first stop on this worldwide tour. Full disclosure, I’m running on 14% battery, dicey service and little sleep, so cross your fingers Lovers of Random, we may lose some valuable insight here.

The day actually didn’t start out looking good. While having an hour and a half shaved off your flight might sound like a good things, it really means the 6.5 hours sleep you planned on getting was actually 3 hours of turbulence interrupted doze off sessions.  After landing, checking in to the Bloc, and participating in an accidental 15 minute power nap in my pod of a hotel room, I found the nearest coffee bar and got a triple espresso before boarding the express train into London. Caffeine would be the key to my jet lag cure. At least I hoped it would be.

I made the decision to see London on foot after arriving at Victoria and realizing Buckingham was only 15 minutes away – not to mention the weather was PERFECT. It took me twice as long because I detoured several times into random gardens, back streets with beautiful buildings and yes, a coffee shop for a re-up. I won’t say that Buckingham was disappointing, but I was certainly underwhelmed. To be fair, that may have had something to do with my desire to find wifi and FaceTime the #PIC, who was breakfasting with the ‘rents at the Redmont. I departed the palace and found a crumpet shop, used my pretty girl discount to swindle the wifi password, and checked in with the loved ones while having a detox juice and a doughnut that wasn’t NEARLY as good as Hero #imisspepperplace.

After getting my loved ones fix, I wandered a bit more. The London Eye was high on my priority list, and lucky for me, Big Ben, Parliament and Westminster Abbey stood between the giant ferris wheel and my current locale. Shout outs to geography for the extra culture. As I was walking bridge #1, Miss London (a fellow Earhart travel mate) reached out to invite me for a drink. I was already planning to find a way to skip the line at the Eye, and her availability gave me extra incentive. This is where the London Eye VIP Experience works in my favor. And once again, the travel gods smiled upon me, because the 3:30 group was full, but a couple doesn’t show, so I slid into their spot.  Bonus, it comes with champagne.  Don’t get excited yet, Randomers, this will prove to bite me in the ass.

The Eye is a funny thing… it *usually* doesn’t stop moving, so you have to board quickly as the car moves across the platform. The views are breathtaking, but I picked a bad time of day, because the sun is adversarial to every picture I attempt. I’ve also managed to book myself on the only VIP car with a demon toddler hell bent on screaming and acting a fool the entire time – a fact his parent seem to be conveniently unaware of. Just when I thought it couldn’t get any worse, the Eye stops for a good 20 minutes due to technical difficulties.  I swear if this car wasn’t glass enclosed, I would have considered  throwing this devil child into the river below. And VIP on the Eye might include champagne, but just one glass. #flawinthesystem

Escaping into the refreshingly silent air after my ride on the Eye that further enforced my belief I will never have kids, I scurry across bridge #2 on my way to meet Miss London. She’s at a brewery in nearby Covent Garden, but we don’t stay long because the bar across the way has better happy hour. We bond over our love of whiskey and adventure, as well as our distaste for waitresses who forget about us. After a round (of doubles), she takes me on a walking tour of her London. First stop: a square with a street performer who has me laughing almost as much as the #PIC does. Next up, London’s “Broadway” and “Times Square”, and we round it out with the breathtaking Trafalgar before dipping underground to navigate the tubes. I fully expected to be following her around like a lost puppy, but I’m happy to report that I was able to contribute to our successful navigation of London’s subway system. She goes her way and I go mine, promising to be her Croatian advocate should British Airways get her in a bind tomorrow.

There’s the 30 minute train ride back to Gatwick where I started this post, and upon arrival at my pod, I realize I miscalculated the Celsius to Fahrenheit conversion for AC in my room and it now resembles Antarctica, which btdubs, doesn’t come until later in this grand adventure. A quick correction, some FaceTime with the #PIC, and I shoot down to the terminal to grab a quick bite and finish filling you guys in on my London Adventure. As an interesting side note, there’s only one restaurant still serving food at 10pm, and the two patrons next to me are complaining profusely about the “horrid” nature of their food.  My cheeseburger warrants no complaints, considering it’s a late night airport meal.

If today taught me anything, it’s that this is still so surreal. I can’t tell you how many times I stood still today, looked around, and couldn’t believe where I was and what I was doing. Between you and me Randomers, I really hope that feeling doesn’t go away any time soon.