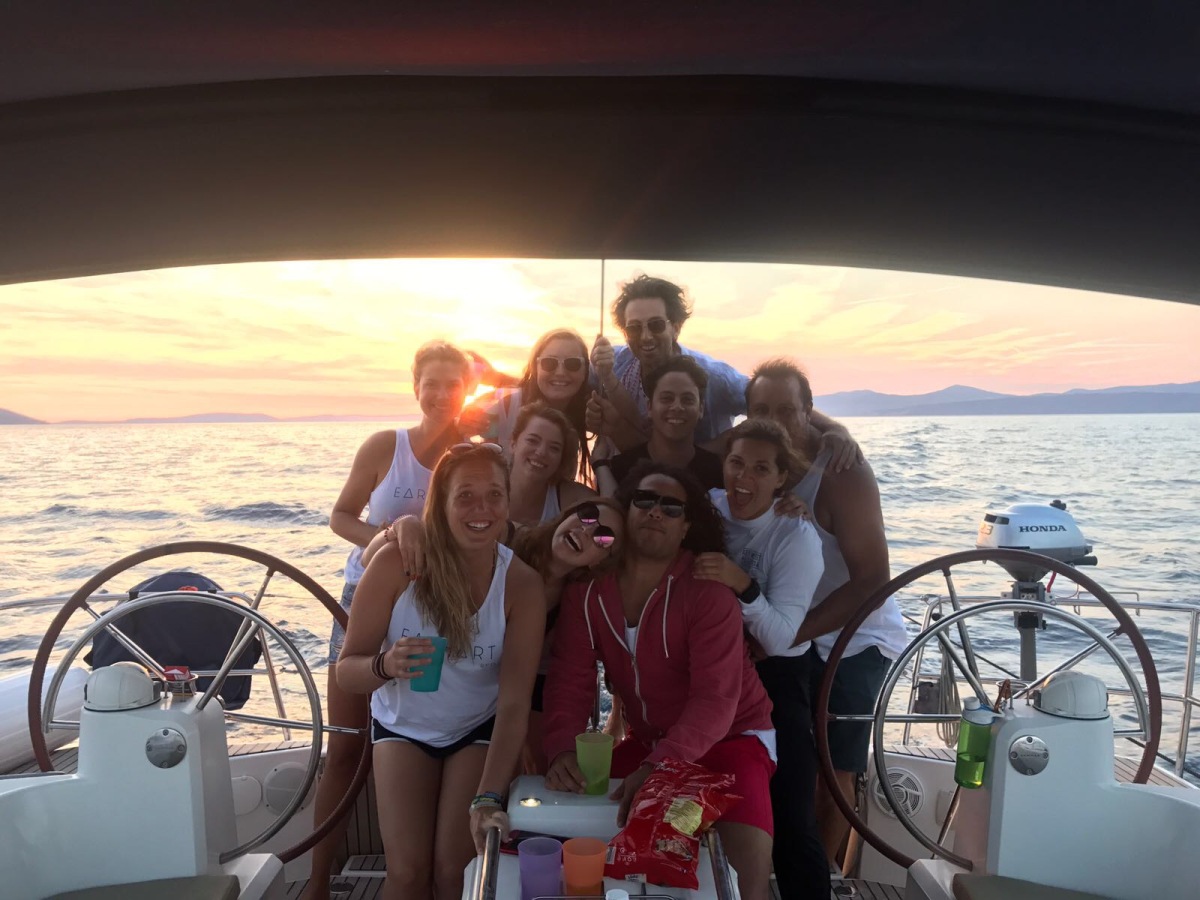 Welcome back my Lovers of Random.  I won’t apologize for the successive posts because I know you’re all dying to hear how Yacht Week is going.  You’re salivating, anxious, hanging on every word I type just waiting for my depiction of the debauchery.   Fret no more, the wait is over.  Here it is:  Yacht Week Part 1.

No proper week long party on a boat would be complete if it didn’t begin with a sick pre-party.  One of the RY crew was departing, so all of the Hartthrobs roll to Sanctuary (BULLEIT RYE FTW) for some farewell cocktails.  ET brought in his crew in from Nashvegas for Yacht Week, so the Southerners rolled out to Antique before reupping with the others to hit Club Central where my brother from another Southern mother had hooked us up with VIP.  If you don’t know what kind of party starts with a massive bottle of Grey Goose lit up with sparklers, just stop reading now.  The DJ was on point, there were aerial dancers, and at one point, all the lights went out and the club spotlighted a guy who just absolutely killed it on an electric guitar. We rolled out around 4, my girl London hooked me up with a slice of pizza, and we crashed out.  Side note, I woke up fully clothed and next to my shoe.  3 hours later.

After rolling for some brunch at Fanat – they technically stopped serving at 10, but I southern charmed our way into some bacon and eggs – Kiwi and I headed out to stock the boats.  It doesn’t get much more real than feeding (and boozing) 20 people on two boats for 4 days.  After brimming four carts with everything we could think of, we commandeered a check-out lane for a good 15 minutes.  $8k Kuna later and we are good to go. 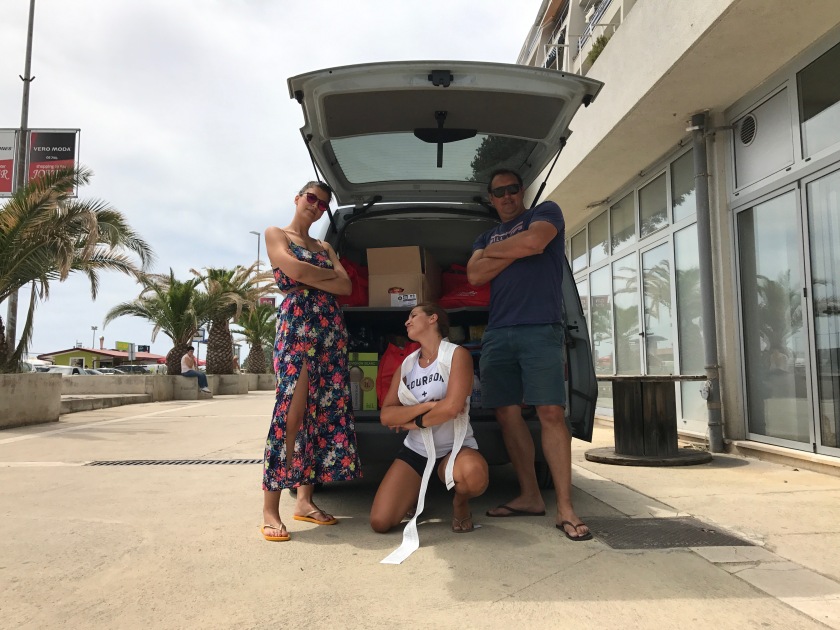 Duffs arranged transport, so we loaded the goods, loaded ourselves and headed to the docks.  After loading the boat – aptly named Uranos – we decided to sail off to Brac to anchor off for the night.  None of us can pronounce his name, so we’ve dubbed our skipper H, HH (his initials), Happy Hour and of course, Skip.  He recommends Ranjak Konoba up on the island for dinner, and it takes a minute to get all 20 of us up there, but once we do, there are no regrets.  We sit down in the middle of a grove of olive trees, carafes of red and white wine show up (and up and up and up), followed by course after course of delicious local cuisine.  I tried everything, and the only thing that wasn’t fantastic was the anchovies.  Half the table is singing 90s pop songs at the top of our lungs, a few get scolded for jumping on the trampoline (apparently its for the kids), and its nearly 3am by the time we get back to our boats.  I’ve been feeling a little under the weather since the Plitvice trip, so I sneak into my cabin for some FT with the PIC before getting some shut eye. 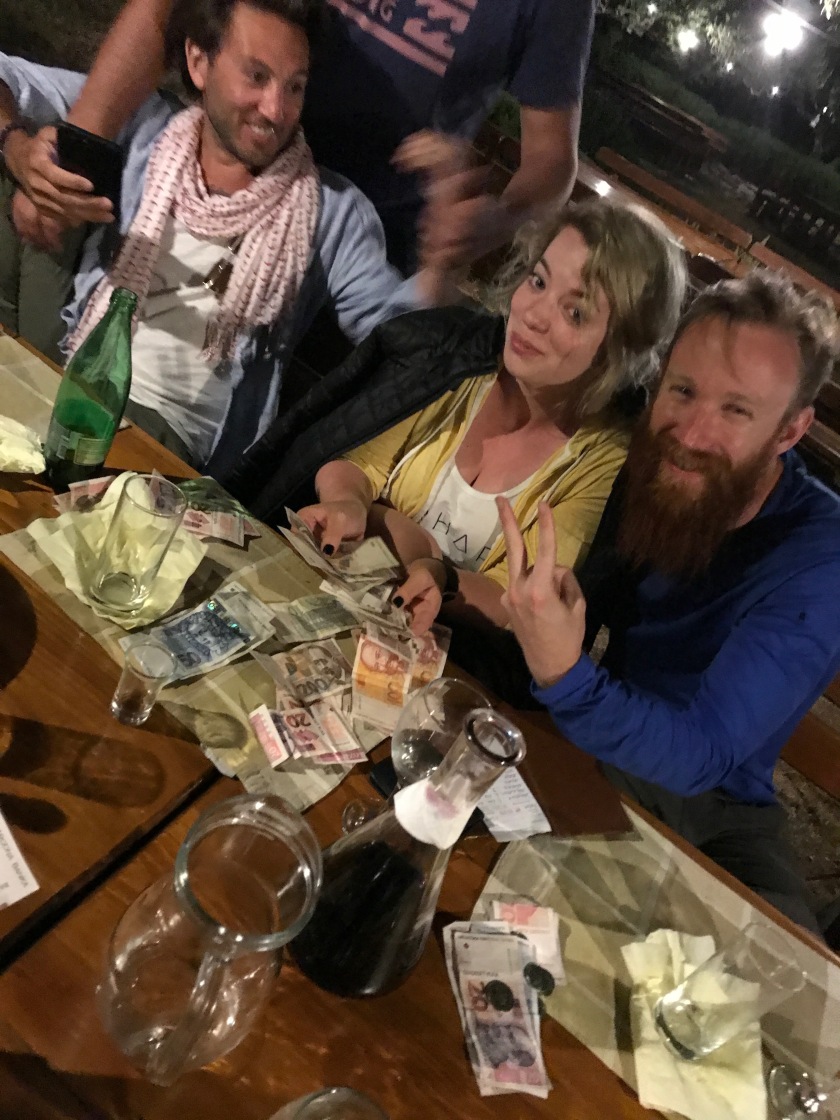 Splitting the bill is real guys.

I’m now convinced that every day should start with a quick dip in the Adriatic, so we take a swim before sailing off to explore.  We dock in Vis and go off in search of some scooters to explore the island.  While Kiwi and the Dutch Lover (Lovers, he’s the Ladies. Man. of the crew) are negotiating the adventure, I execute a daring rescue for the lone football that was thrown into the water by Rems, the one of us who can’t swim.  *I guess you could say I baywatched it’s ass.* . The scooters were the best idea ever.  We circled the island atop the winding, curving roads and got views of Komiza and Vis from atop the mountains, rode through olive tree groves and lavender fields and got back just in time for dinner. 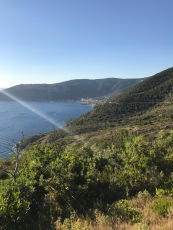 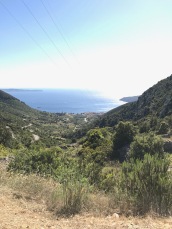 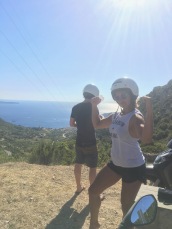 Duffs hasn’t stopped talking about the Peka at Konoba Magic since we booked the boats, and I can’t blame her.  You call in advance for reservations because at this tiny little village house of a restaurant situated in a vineyard they cook the meat for HOURS in coals.  We show up and so does the wine, followed by smoked tuna, anchovies (much better than the night before) and sardines before the main dishes of lamb and octopus show up.  I’m not even going to try to describe it to you.  There. Are. No. Words.  I keep thinking that it doesn’t get any better and so far I don’t hate that it does. 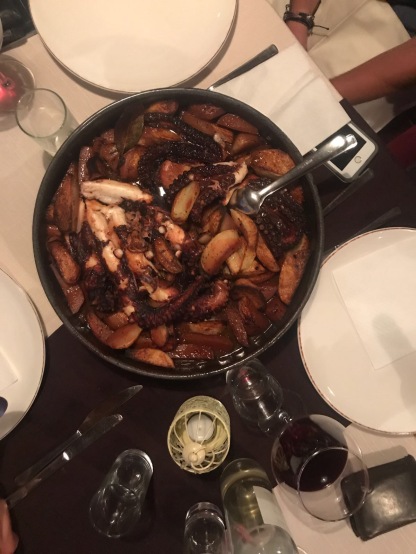 Its the first official night of Yacht Week, and the party is at Fort George.  Never to one to turn down a dance party, I load up with my Boatharts and ride in an old army Jeep up to the top of the cliff.  My already clumsy and now wine tipsy self comes in like a bull in a china shop, tears up the floor, tears up VIP and I tear up my knees after eating it on the stairs.  Duffs grabs ice from another one of ET’s VIP setups to clean the blood off my legs and we keep going.  There’s an enjoyable stroll down the dock, and upon arriving at our boat, I see Duffs asleep on the deck, which means my cabin is empty. #win.

Despite seeing the sun come up, I’m up an at em early – well, I use at ’em VERY loosely.  We’re cruising around to spots I’s already seen, so I chill on the deck and bake out my hangover.  After docking in Komiza, we find an empty bay and I post up on a rock to continue my recovery.  My voice is starting to go, so I take it easy at a marina cafe, eat dinner on the boat, do some work and settle in for a solid night of sleep. 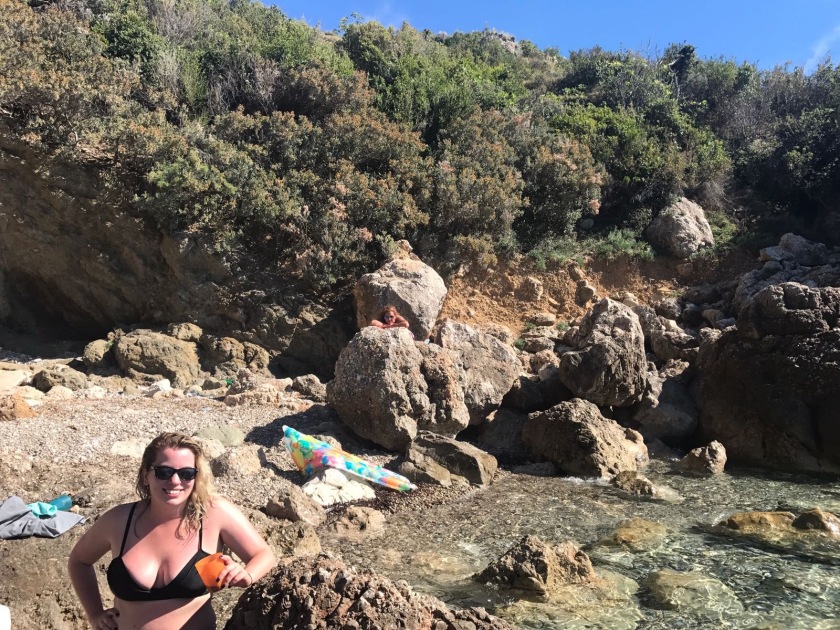 A healthy 8 hours does my body good, but not my voice.  Kiwi ducks into the marina and gets supplies to make me tea with honey and lemon, but its all downhill.  At the time of typing, I can barely speak at all.  And my laugh frequency is completely gone.  So incredibly sad that I’m not filling the air with my infectious giggles, but no worries Lovers, I’ll be back. We sail off to another bay for the morning, then off to St. Klement for some lunch at Toto where I’m trying to answer client emails on the worst Wifi ever while eating the most delicious monkfish ever. 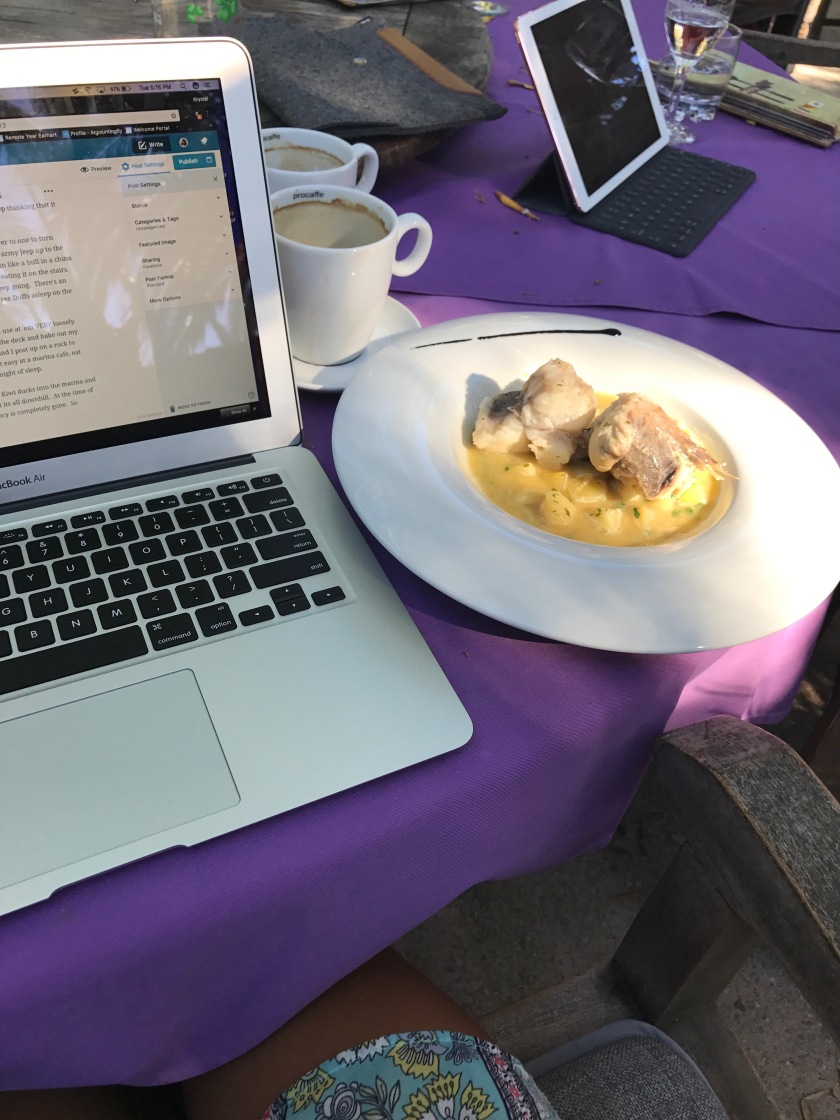 That night, a few of the crew from Split comes to join us in Hvar  and we do some Yacht Week party hopping from Hula Hula to Kiva to Seven.  We snuck into someone’s front yard, I blew out a flip flop (and fixed it bc I got it like that), had some late night pizza and headed back to the boat.  There are a million stars in the sky and I can’t stop thinking about what a fun night it was.

Sadly not all of us had as great a time as I did.  Take 18 people in tight quarters, add alcohol and subtract sleep and tensions can start to run high.  We sort it out pretty quickly (mostly after sobering up), but even so, a few of us have grabbed rooms in Milna, where we are currently docked.  I think we will be pleasantly surprised at what some hot showers, good sleep and a little space will do for us. Not all fun and games Lovers, but the tramily will sort it all out.

I’m off to grab a much needed nap before meeting the Boatharts for dinner, so here I leave you.  For now.  Yacht Week part two comes next week.  Stay tuned

One thought on “Life on Uranos”