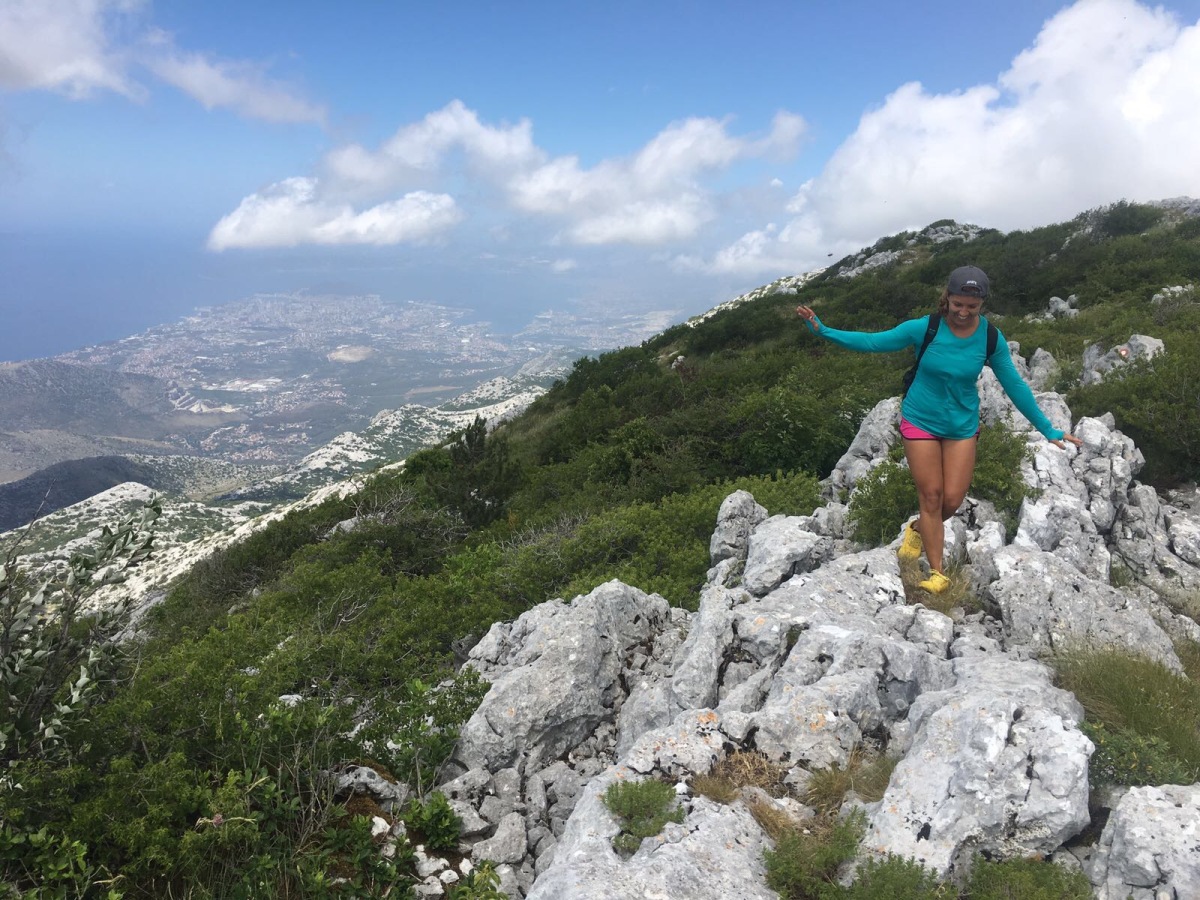 Dobar don my Lovers.  I started this post from a quaint little courtyard cafe that I stumbled upon while walking through the breathtaking streets of Belgrade, and I’m finishing it from my 15ft ceilinged room in Budapest.  I am fully aware that I am WAY behind and there’s much of the adventure that you need to be updated on, from jazz bars to summer parties, road trips, cliff jumping, bay swimming, yacht club hanging, private dinners, solo wandering, farewell parties, illegal activities, and the best airport dance party ever.  And that’s just the last weeks of my time in Split.

In the interest of keeping this post to a manageable reading length, I’ll try to keep it to a 10,000 foot view of the adventures, and only delve into the details of the juiciest of activities.  This is going to be a challenge for me, as we tend to pack 3 days worth of life into every day. A quick check of my sleep app has me averaging 4.5 hours of sleep each night, and while I occasionally go down for the hard 11-12 hour slumber (actually just woke up from one), the energy that is created internally by the amazing people I’m surrounded by makes powering through a simple task.

After a week that contained a lot of work (yes, I do actually work), entertainment of visitors from Remote Year Kublai, spectating of a Hartthrobs soccer match (that Duffs said I wasn’t allowed to participate in because my voice hadn’t returned), I was prepping for an easy night when this happened:

First, yes, we salsa.  every Wednesday.  Well, they do – I have never actually indulged. Second, IDK about you, Lovers, but I see a post like that all thoughts of Netflix and chill go out the window.  We got there around 11, got the dance party started (because let’s face it, we don’t need a crowd, we are a crowd), and the place was a madhouse before you could say “summer solstice”.  We crawled on outcroppings, sat on vans, took shots, danced our little Harts off and left in the wee hours of the AM covered in sweat (ours and others), drinks (ours and others) and with what I’m starting to think is a broken big toe. 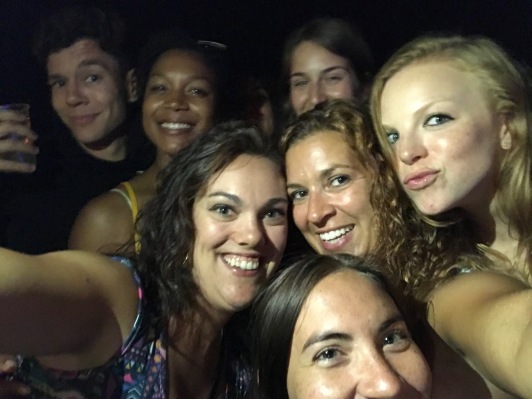 After spending the next couple of days knocking out work, knocking interviews out of the park (I’m employed my Lovers!) and hammering out a 22 persons, 2 van, 1 car, 5 Air BNB, 2 city trip (with the help of The Remote Yogi), we loaded up and headed off for Dubrovnik and Montenegro.  We crammed 9 into our van, took a coastal route and enjoyed view after view of the most breathtaking scenery.  Dubrovnik itself was magical (and I won the AirBNB game for realz) and included a stellar outdoor DJ set with intense visuals, but my favorite part was the 30 foot cliff jump I executed from beneath the castle walls. Sorry Lovers, no pics of that one. 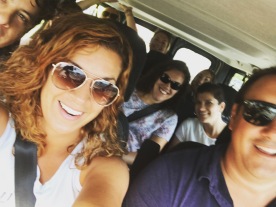 The next day we are onto Montenegro.  Van karaoke, Bosnian border crossings, car ferries and another AirBNB win in the bay of Kotor.  I’m going to eventually have to stop saying that “this is the most beautiful place I’ve ever been”, but it was pretty spectacular.  We did a family style dinner, hung at a swank ass yacht club, climbed 1,300+ stairs for the view and the sunset (and the ‘Gram, of course), had a private dinner provided by a local who sang traditional songs for us, consumed copious amounts of local wine, stared at the stars, and bonded further as a tramily.

Sunset in the Bay of Kotor

Suset in the Bay of Kotor

Budo, owner of the private restaurant

Views along the way

Don’t take this next sentence the wrong way, because I adore each member of my Earhart family, but after rolling 25 deep for the last three days, I’m not disappointed about boarding a flight to Belgrade all by my lonesome to roll dolo for a couple of days. I meet up with my temp roomie, run into DL (who is on his way back to Split), settle into a cafe to get some work done before heading off to grab some dinner as a prelude to turning in for the aforementioned and much needed crash session. The next day I learn how breathtakingly beautiful Belgrade really is.  It has a vibrant city atmosphere with an old world feel.  I walked almost 12 miles around the city, taking it all in. I went to the two tallest building and denied access to the top of both.  I explored the Fortress, where I was humbled by the fact that this part of the world was at war in my lifetime.  After the temp roomie and I caught an epic sunset , we boarded the Ambar train and had 16 courses of mouth watering local fare, washed it all down with some good bourbon (no rye in this town either) and headed back – but not before I danced through a fountain. 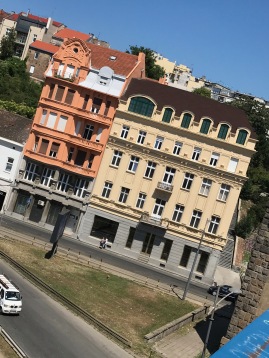 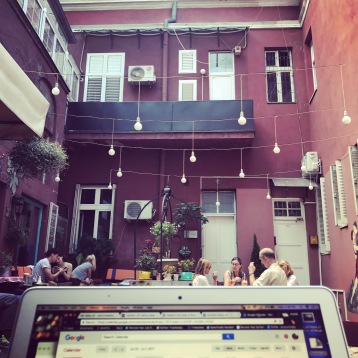 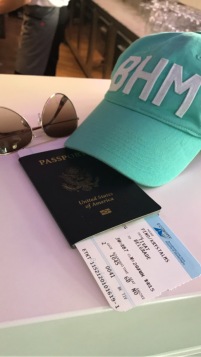 The next day, client issues forced me back to Split earlier than anticipated, so I had some interesting airport conversations, pulled out the Southern Charm, and made it back home in time to climb Mosor, the big mountain you see in the background of all the pics for Split. Guided by Nate, past remote and avid climber, we took the path less traveled, and endured a grueling climb up to the little red hut where we left our names in the books at the top.  After rest and refuel, Nate pointed to the next peak and said let’s go. Lovers, I have never done a ridge climb before, and I spent the next hour or so exhausting all my adrenaline stores to achieve crawling across this ridge to the next peak, but fuck, how amazing I felt when I got there…. there’s just no describing it. 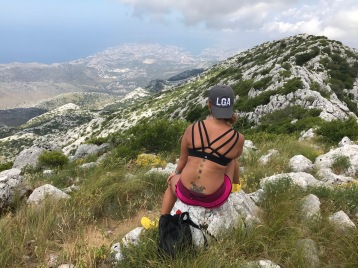 We got back and showered just in time for the Farewell party.  We boarded a boat to Joe’s Beach, swam in the sea one last time, and sat on the shore after sunset and had a Hartthrobs sing along. Friday was our last night in Split, and we had decided to close the month out exactly as we had opened it – with a dance party at the open air club.  But first – ink.  Duffs and I got our Split marks needled in, and The Remote Yogi even joined us for some Hakuna Matata. After that, we left our mark on Split by tagging the wall outside of the workspace before heading to Old Town for one last Croatian edition of Danceharts. **This actually turned out not to be the case, as after our chartered flight from Split to Budapest got delayed 3 hours (and after 5 bottles of liquor, 4 cases of beers, 4 bottles of champagne and 4 bottles of wine), we started a dance party in the airport.  All 48 of us.  Earharts can start a dance party anywhere. 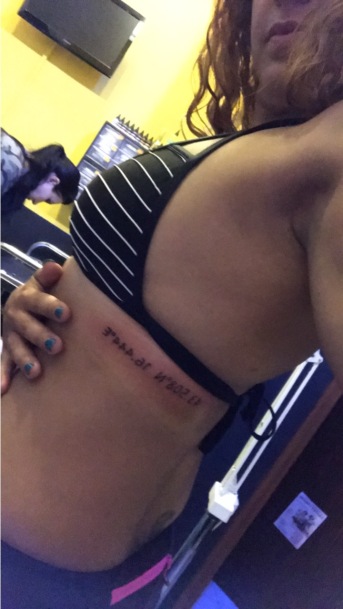 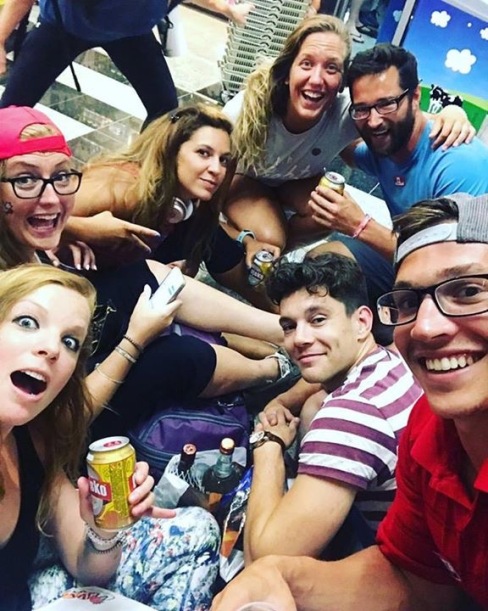 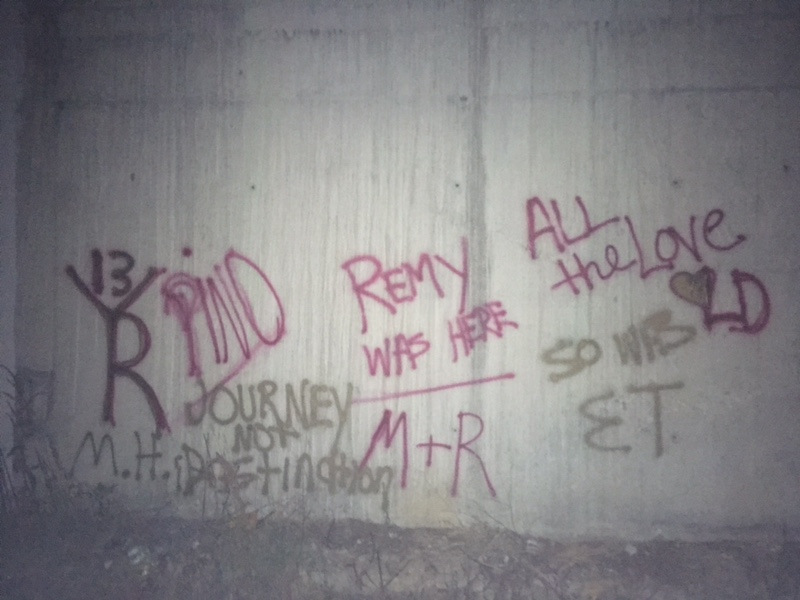 Ok Lovers, you’re all caught up on the first 35 days.  The Budapest adventure started Sunday, but you’ll have to wait for the updates on that.  For now I’ll tell you I’m in love with this city, but I’m reserving my Random raving for now.

Until next time, my Lovers.

Guess what else I updated?  PICTURES!

2 thoughts on “Sleep When I’m Dead”