Happy Monday my Lovers!  I am coming to you from terminal C at EWR where I am sipping a double Angel’s Envy Rye and waiting on my NY Strip dinner before flying back to Budapest after going (going) back (back) to Cali (Cali) for a weekend with the #PIC.  I know I had a goal not to re-enter the good ole’ USofA for this year, but I couldn’t be happier about my decision.  I didn’t exactly “come home”…. I spent my entire weekend in what Travis deemed the “growth zone”, pushing myself to my limits in an unfamiliar environment, and loving every second of it.  I am jet lagged, bruised, and my lips are so sunburnt they are swollen to the verge of cracking… and my only regret is that I didn’t get to ride the 2 up bike.

A while back, I attempted to stage a surprise trip to the States to see the #PIC.  I teamed up with some of his racing official buddies and his bestie to coordinate, but my plan was disatriously thwarted when my calendar junkie ass put the flight on the one I shared with him.  The element of surprise was lost, but not the excitement.  I would join them at Laguna Seca in beautiful Monterey, California for Round 8 of the FIM World Superbike Championship.  The trip include almost 45 hours of flight time, nearly 60 hours of total travel time, a 9 hour time difference swing, and three long days at the track, but I was all in from day one not only for the experience, but the chance to be included in a part of the #PIC’s life that’s important to him. Even as excited as I was though, it didn’t come close to preparing me for the amazing weekend that I still haven’t come down from.

To be completely honest with you, my faithful Lovers, the weekend did not start on the greatest note.  After a scheduling SNAFU (totes my fault) about my new job, I learned when I touched down in the US that my new job training was pushed up due to my copious amounts of flying on the originally scheduled date.  I arrived at the track, got acquainted, and hustled off for a 3 hour training session in the official’s trailer. #RemoteReality at its finest.  After being completely overloaded with information that I can’t wait to master, I was free to resume my duties as a volunteer on Pit Lane… and not in a skimpy dress or skin tight leather with a smile screwed on my over makeuped face – although I would have if asked, and have made respect for the girls who did – but in the actual throes of officials duties – boards, horns, grid starts, even a checkered flag waiving.  I was scared to death for the majority of it – I remember at the end of one day, the official officials were comparing steps and and max heart rates for the day and I kept quiet because mine had spiked at a regular basis throughout each of the three days.

Even with my extensive vocabulary and whiskey buzzed writing style, I won’t be able to come close to getting you in the moment with me, but I will do my best to at least get you a taste of my adrenaline fueled weekend.  My pit lane duties began with the holding of the boards.  The boards signal several things, including the opening and closing of pit lane and the start sighting laps, warmups and races.  There were 4 classes of races there: The World SBK, the MotoAmerica Superbike, Superstock 600, and the KTM RC Cup.  For the first World SBK session, I’m handed the 5 minute board to signal the time until track opening – which I proceed to display UPSIDE DOWN.  #facepalm. In hindsight, I’m glad it was my first one.  I didn’t make that mistake again. After learning that the next day I would be on the grid working lollipops, I attended a volunteer meeting that got my anxiety level at a all time high (although I partly blame the jet lag).  The lollipop guild is responsible for holding up row numbers for the grid at the start of the race.  Much less about letting the riders know where they go, and much more about being ready with a yellow flag should a rider have an issue at the start – a stalled bike or unready rider can cause people to get seriously hurt. I’m glad the day is over and I’m even more happy about the double rye the #PIC has waiting for me at the bar.

I’m a bundle of nerves on Saturday, but also know I just need my first time through to be comfortable with it.  I get there the next morning and see my row assignment – Row 2.  As if I’m anxious enough, Padgitt walks up to me about 7 minutes before go time and says “Don’t worry.  If you fuck up, there’s only about 30-40 million people watching – worldwide”.  Thanks Scott.  I later learn that WSBK is broadcast on 95 channels in 175 countries and the 30 million viewship earlier mentioned was not all fluff designed to have a little fun at my expense. Luckily the weekend of lollipops wielding went smoothly, and I even got to write up a grid report on a rider for the Sunday round. 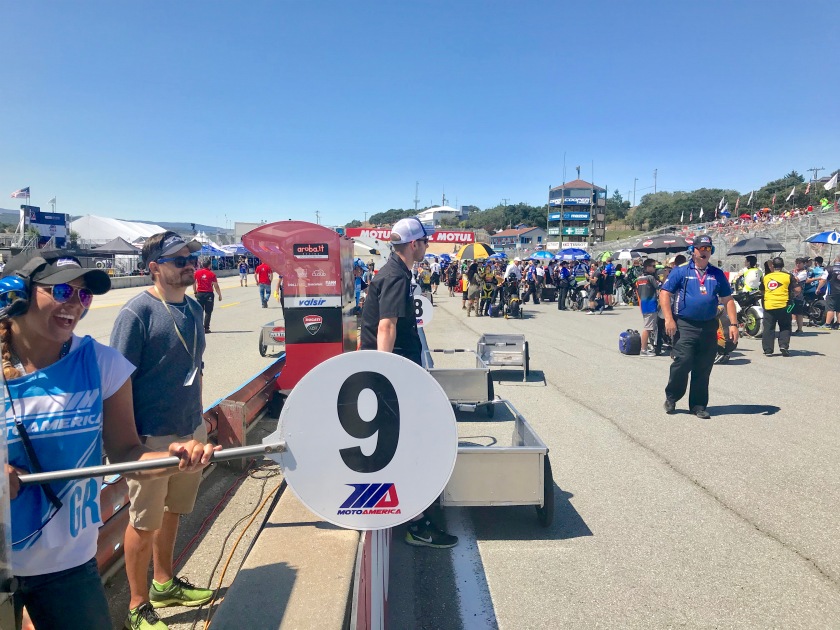 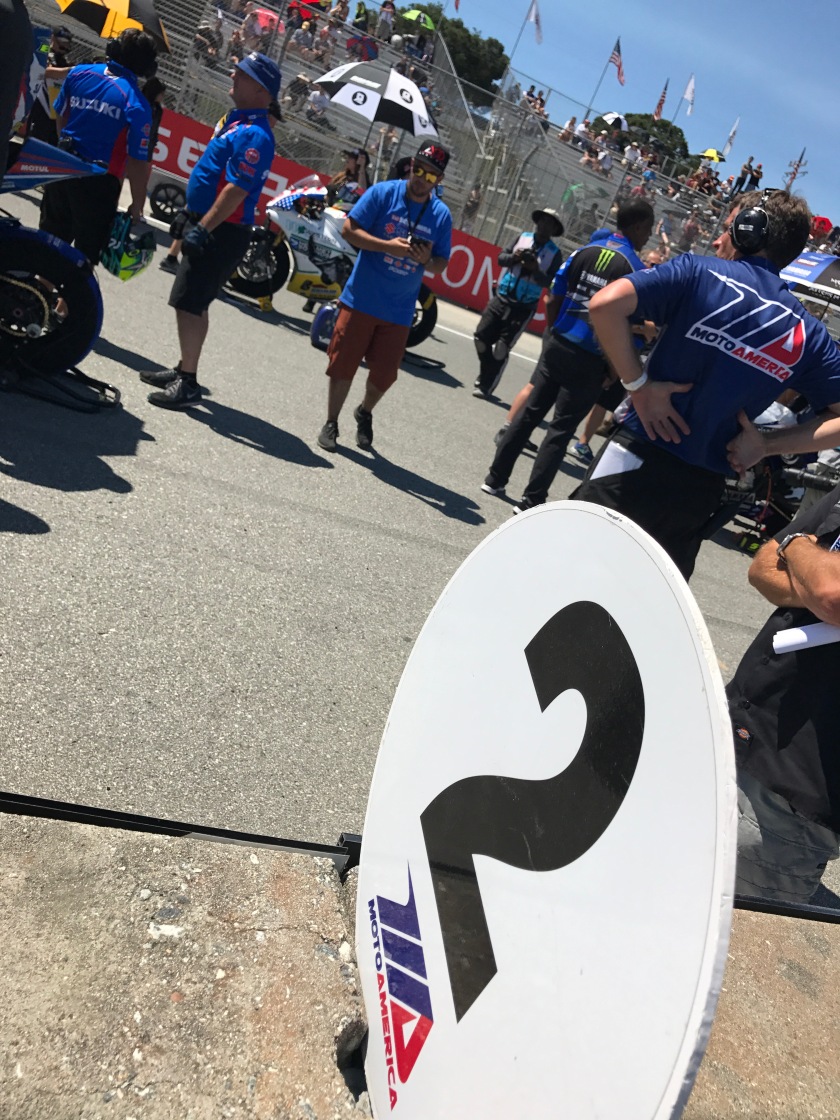 Up until Sunday, my favorite part of the weekend was running the pit lane boards.  I am up on the wall and I can feel the heat of the bikes as they roll out less than two feet away from me.  Never one to turn down a chance to face something that increases my heart rate, I only hesitate momentarily when the #PIC asks if I want to wave the checkered flag for a World SBK race.  Do I?  Fuck. Yes. I. Do. I’m saving my comments on the race family for last, but once again, I’m told (lovingly) not to fuck it up – and def don’t drop the flag.  I’d like to tell Remy I did it for the ‘Gram, and the #PIC did get some amazing shots, but I did it because it was waving a checkered flag at an internationally televised race and it was on the top of the list of the most exhilirating things I’ve ever done.

​
Hang with me Lovers, because we are not done yet.  For Sunday, my lolli row is 9, which means for some races, I’m not needed.  This is the case for the second World SBK race, so the #PIC tells me to follow him, we are running the boards at the FRONT> OF> THE> GRID.  This means there’s a lead car.  And a﻿ pace car.  Then there is me. And him.  Then the umbrella girls.  And then the grid.  25 or so riders standing ready to race at nearly 160 MPH according to our cues.  Surreal doesn’t come close to describing it.  The #PIC and I make a great team (meaning he loves me enough to make sure I don’t fuck up and make an ass out of myself on national TV wearing MotoAmerica gear)…5 minutes board to horn…. 3 minutes, B2H… everyone but two crew and the *aforementioned* umbrella girls clear…. 1 minutes B2H… bikes start, crews and ladies leave… 30 sec B2H.. it is me, the #PIC, and the riders… we clear, they rev and get in position in perfect unison, green flag and go.  There was nothing like it.  I mean nothing. I got chills that racked my entire body.  I met Keanu Reeves about 7 minutes later and it didn’t even come close to comparing. High on that, I run my lollipops for the rest of the day, help the crew break down the tents, and load up to head back to SJC for one more American night in a fluffy bed with too many pillows and an extra large shower before heading back to the European adventure.

I could go on forever about the amazing nature of this weekend, but the last thing I want to mention is how I now feel like I have gained an additional family.  I believe family is what you make it, and most of the team this weekend has known each other for YEARS.  They have raced together, officiated together, loved and lost together.  But they were more than happy to welcome me, a full on visitor, solely there for personal reason and with no knowledge of motorcylce racing at all, into the family, giving me encouragement when I needed it, but much more often, shit when it was warranted (or the wind was blowing the right way).  Pranks and chirping are first language in this crew, and I hope I at least came close to holding up my end.  Rachel ,the pit team leader, has a confidence and swagger that not only I saw, but was confirmed by a photographer.  Scotty is the ladies man of the group, and I can’t help myself from smiling about the lingerie store buyout or the Google+ mishap, even in the middle of EWR by myself.  Pat successfully assimilated a new chirp of the fact that #PIC and I can’t keep our hands off each other, and Chris came in clutch on Sunday with some fourth quarter zingers that pushed him up the leaderboard in points.  But by far, my favorite new connection is the #PIC’s brother.  This isn’t the first time we’ve met, and that time didn’t go as I would have hoped, but by the level of abuse I got from him this weekend, I think we bonded on a level that I’m afraid to put into words, because I’m sure he will twist them into a sick and non-intended nature.  And I wouldn’t have it any other way. 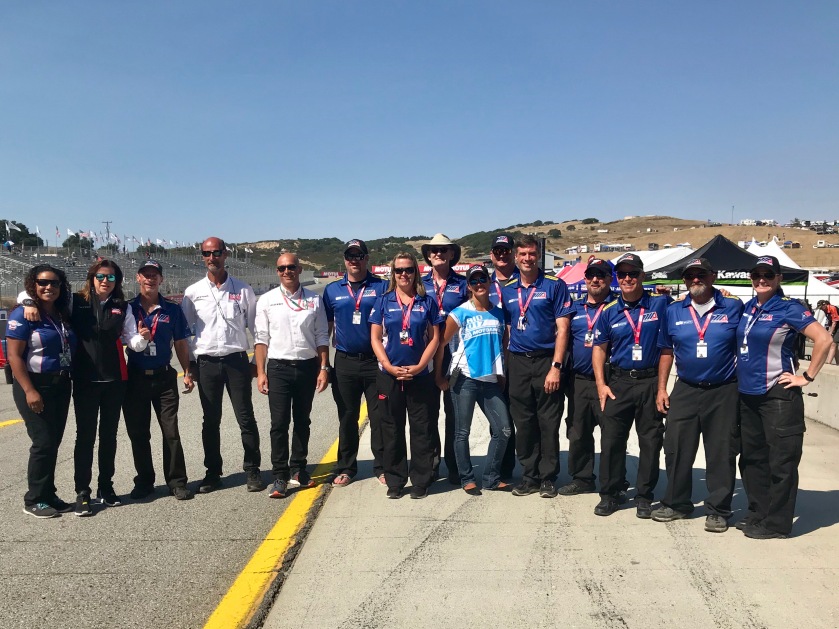