Hola my Lovers!  It’s been a while since I’ve indulged you in a detailed play by play like I did back in Split or Budapest, where I recounted my adventures on a least a weekly or biweekly basis, often more frequently. Either way, and though it is after the fact, I feel like there is enough content to break my last month into a 4 part series covering each jam packed week of Mexico City, our final adventure on our chosen journey.  And I feel I can do this in a manner where I don’t feel like I’m rushing you through in an attempt to “catch up”.  Instead, I’m looking foward to re-living the live, laugh, love that was CDMX.

The CDMX adventure began way before we hit CDMX.  With a 4am rousing for a 430 airport pickup and my continuing procrastination regarding packing, the most exciting part of my night before transition was Mel’s uncontrollable giggling as I answered the door for my Rappi order in my Rappi hat, a favor Sadie and Marky had championed for our travel day activity.  We arrived at the airport, zombies in bright orange hats, only to discover our flight was for Sunday.  All of RY always travels on Saturday.  As my Ella and the mommas tried to sort things out, I found a Marky and used him as a nap vessel until we were told they had managed to get all 30 of us on a flight that afternoon.  Able to make it past the security gates, we found a bar to post up in and Marky, DL and I took advantage of Aguardiente bottle service, pouring ourselves onto the plane as gracefully as we had poured each shot. 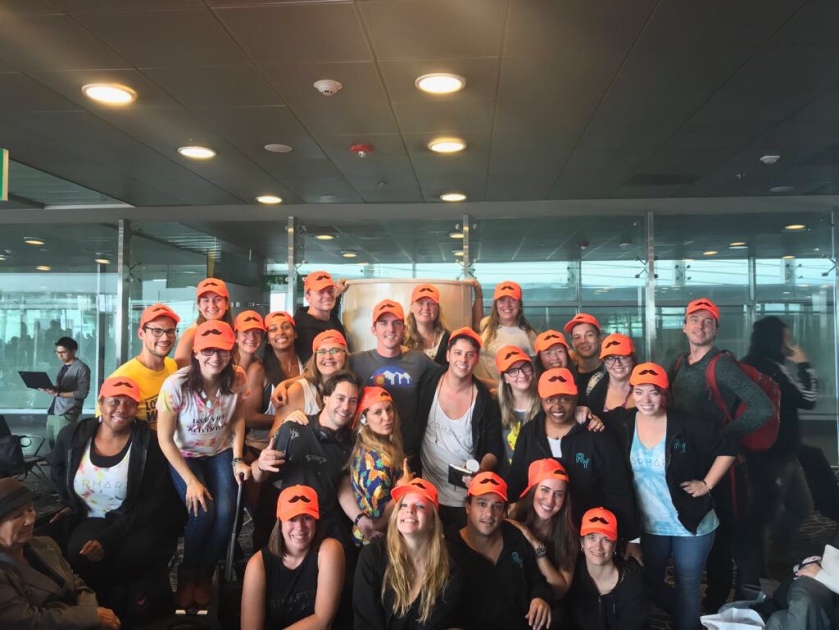 After an annoying delay on the runway, I re-engaged Marky’s services as a pillow for my second much needed nap <er, pass out>, waking in time to see our plane swinging wide and adding more time to our already re-booked and delayed flight.  Turns out there was a hailstorm in CDMX preventing us from landing.  After landing and collecting baggage, a few find that checking into the wrong flight has caused bags to not arrive, so the gaggle that got checked in before the scheduling error was discovered proceed to lost luggage, the rest of us pile around eating Mexican Cheetos and grabbing our pesos out of the ATM.  By the time we get rolling an to our accoms, its after midnight.  Don’t worry about the math Lovers, that’s a 20 hour travel day.  Went out with a bang. 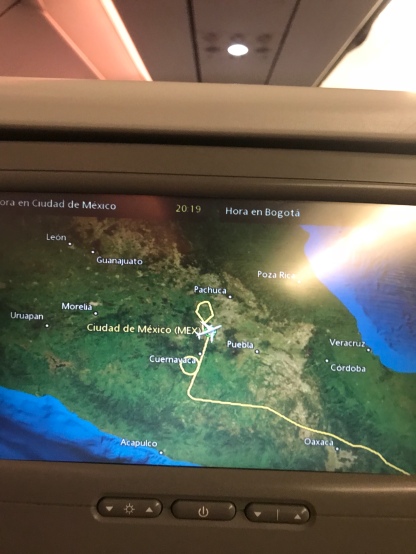 I’m rooming with Mel and Taryn this month, but when we arrive at our home for the month, I’m focusing on a friend in crisis at home, so they get the run of the place prior to rock-paper-scissors for rooms.  Round one goes to T.  Mel takes round 2, which leaves me with the shit room. They take the two upstairs.  Oh, I forgot to mention our apartment is two stories. With an open ceiling living room.  And glass all across the front.  I trudge off to my losing room…. with a patio.. and a walk in closet… and my own bathroom… wait a second, if this is the shit room….. further inspection reveals that we won the apartment lottery this month, so instead of going out for the evening, we Rappi in some Indian and settle into our bad ass digs.  Just when I think it can’t get any better, Marky responds to my location pin that he’s 100ft away on the bar street – which means bad ass apartment IN happening part of town. Double win.

The next day is city preview, so we walk to the workspace amongst the ice and foliage that covers the ground after last night’s storm.  Despite the storm, it is a beautiful day, so after our intro, the team takes us to Chapultepec Park for a tour and some history.  Afterwards, a large majority of the crew hits a local eatery for lunch, after which we depart to meet up with some Citizens we had met along the way.  A few rounds in, we decide to move the party to our place (our swanky, loft-esque, built for entertaining space) and quickly grow to 20+ deep over the evening.  Monday is work and WestWorld, and I make it to bed relatively early.  Unfortunately, I don’t stay there long.

Around 3am, I’m awakened by a feeling… a feeling I haven’t had since…. Peru… I’m going to… I’m not… oh, fuck, yes, I am going to throw up.  I barely make it to bathroom in time, and spend the next 7 hours or so in a similar state. Bed>bathroom>bed>bathroom.  I’m able to doze off a bit in between spewing my insides up, and awake around 9am to an alarming number of messages in our group WhatsApp.  After some back and forth, we discover that 17/30 of us have gone down with some ailment – I consider myself lucky mine was up, not out.  One of the affected is my roomie T, so we Rappi some activated charcoal, Pedialyte, and home for quick recovery.  I hop on a call and quickly preface that if I suddenly disappear from screen, I have good reason.  By noon I’m feeling better, so I try some soup, and by then end of the day I’m keeping everything down (and in).

I rebound swiftly enough to hit Crossfit the next morning – and I exit class with a text message from Marky asking for a water delivery after his house went down the night before.  Seems that all but 2 of the 13 that had escaped the first night went down in night two. Montezuma does not discriminate.  I deliver all the above mentioned goods that got me back on my feet so quickly before hitting the workspace for a call laden day.  Besides a packed work day, I’m running another Going Deeper session this evening, so I’m prepping for that in addition to everything else. Told you it was a busy month.

I’ve got no complaints about an uneventful Thursday and Friday – my roommates and I have discovered the only thing better than our apartment is staying in it all day and only putting pants on to answer the door for Rappi.  But Friday night is Lucha Libre, so we adorn lower extremity clothing for some good ol’ fashion Mexican wrestling fun.  We’re given a tour of the arena and private training before the show – RY exclusive, of course.  After our ring tumbling lessons, we find our way to our seats for one of the most entertaining shows I’ve ever seen in my life.  We laughed and cheered for hours while we downed beers and nachos and instant ramen – yep, the concession guy sold instant ramen.

Wrestling is followed by dancing at Whiskey Wallace, conveniently located across the street from – you guessed it – our bomb ass apartment. This made it easier to abandon ship when the subsequent club search was less than fruitful.  T and I headed back to our place (sensing a theme yet?) to (take off our pants) open some wine, and, well, whine a bit.  Mel came home to join and we washed down leftovers with Malbec while chatting the way girls do.

Here to There to Klingande

Saturday I was doing a test run on an app for a company wide photo scavenger hunt, so I enlisted Mel’s help and after some brunch, we bop around grabbing pics of ourselves in the city.  After 5+ miles of hiking, we decide to head back and post up at Whiskey Wallace before grabbing a pre-Klingande nap. 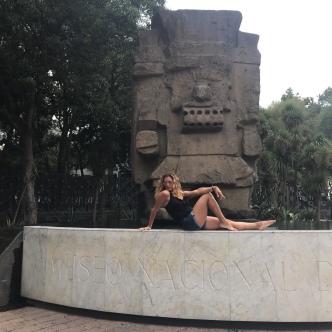 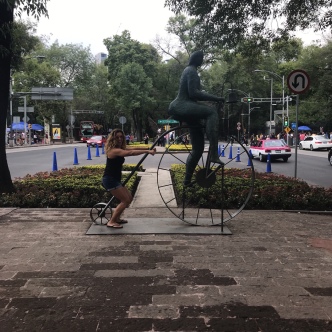 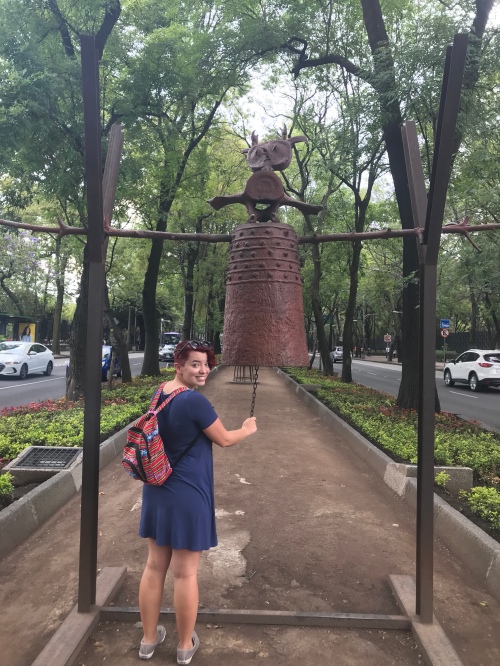 Excuse me?  Did you just ask what Klingande is?  Lovers, let me educate you – you can thank me later.
Jubel    RIVA    Somewhere New
A N Y W H O
I saw him perform at Tomorrowland, so there’s no way I’m missing his CDMX performance.  We meet up with some Citizens – including my long lost roomie from my short stint in Belgrade, dance our little hearts out and pour outta the club around 4am.  As we’re debating Uber size, Sutton points to a stud behind me – its KLINGANDE HIMSELF!  I’m a <little> intoxicated, but I strike up a convo and we talk Tomorrowland (guys, he’s main staging next year) among other things for a good 10 minutes.  As I thank him for his time, he asks if I want a picture…. I was so busy fangirling, I for.got.the.pic.  We grabbed a quick snapshot and the crew and I Ubered off.  I poured myself into bed, still jazzed from the night, so I swiped my World Clock to see who I knew in the world still awake.  Kiwi and Hunter were the lucky winners subjected to my ramblings while I waited for sleep.  Solid dudes those guys.

That wraps up week one.  Stay tuned for week 2, coming to a blog screen near you soon enough.

Guess what? Pics are updated!