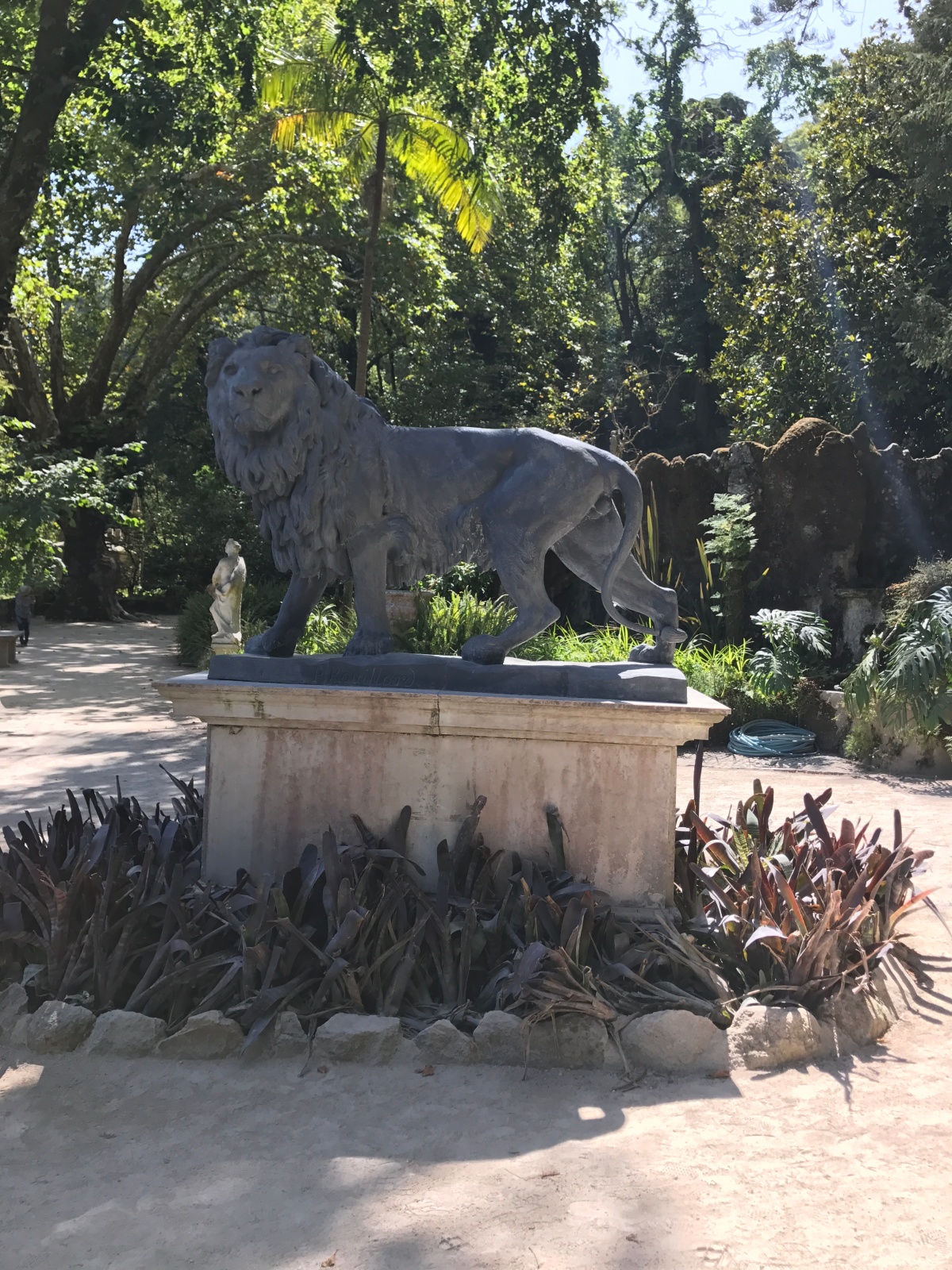 Boa tarde meus Amantes.  In an attempt to keep you up to date on the adventures, I’m doing something I’ve never done before: writing about a side trip the moment I’ve returned from it.  You would think that this is the most logical step: the events and sights of the day fresh in my mind, thoughts and words just ready to tumble out with precision…. but considering I haven’t even started my post on Porto yet (that trip was nearly three weeks ago), consider yourselves lucky that I found a few free moments to address you, my ever so faithful Lovers.

As my time in Lisbon is winding down (very quickly, I might add), I find myself with a laundry list of things I wanted to do while here that have not been checked off the list yet, and Sintra was one of them.  Sunrise is another, so after missing yesterday’s monthly sunrise hike with the crew (snooze and stop are too close together on my alarm), I rounded up Marky and Isaac (who also failed the initial trip) and we drug ourselves out of bed and up the hill this morning to watch the sunrise over Lisbon.  You can read more about this in my Lisbon post, but after the big ball of fire was adequately high in the sky, I made my way through the streets of Alfama to the Santa Apolina station to catch the 7:45 train to Sintra.  It is an hour train ride, and I have to be back at 2pm to knock out some work before tonight’s farewell junction, so when the train hits the station in Sintra, I’m off to the races to fit everything in before catching the 12:36 back to Lisbon.  Throw in me getting off at the wrong stop initially, and I’m down to less than 4 hours….

My first piece of advice for doing Sintra in 4 hours or less: don’t be that asshole.  Sintra deserves so much more, and I am kicking myself in the ass for not giving this castle and garden laden city it’s proper due…. alas, I vowed to do the best I could, and stubbornly did it all on foot.  From the train station, I set out and began the 1,477ft ascent to the Pena Palace, ducking into the woods at my first chance to hike the majority of the way through woods so quiet, I felt my labored breathing was disrupting the serene environment.  It is still early when I arrive at Pena, but the ticket lines are already long and a Remote Citizen who visited the day before has told me she didn’t think it was worth the wait, so I duck around the corner and make my way up to Castle of the Moors instead.  I don’t regret this decision at all, and I’m like a kid at Christmas climbing all over this castle, along the walls and up the watch towers to see all of Sintra from above.  The view is fantastic and the castle has expansive walls and nooks and crannies a plenty –  I want to stay there all day, but I’m a dick and I only have 2.5 hours to go, so it’s down the hill into the city center I go. 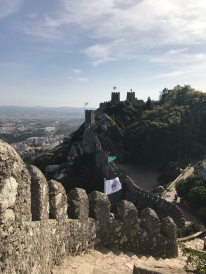 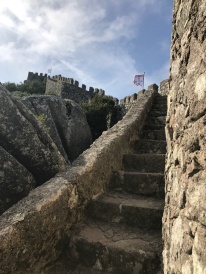 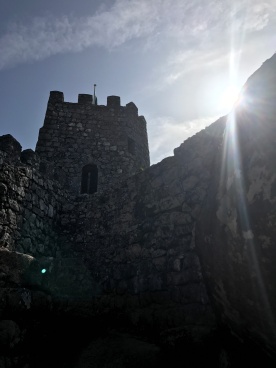 My previously mentioned amazing city team member Tomás (who happens to be from Sintra) has provided me with some must dos, should dos, and if-you-have-the-time dos.  I obvi only have time for the must dos, and one of those is hitting Piriquita to sample the local pastries, travesserio and queijada.  After my insane trek up the mountain and rather fun walk {hop/skip} back down, I’m famished and order one of each and an iced coffee.  Here’s the thing about Portugal: you never know what you are going to get when you order an iced coffee…. sometimes you get an iced coffee.  Sometimes you get hot coffee with ice.  Today, I got a hot cup of coffee and a glass of ice beside it… but it all works out, and the pastries are delicious.  If I didn’t have more walking to do, I would not have hesitated to order an entire box of travesserios and brought them back…. to share of course….. But I have castles to see and gardens to walk and only 1.5 hours left, so I pay the check and move on. 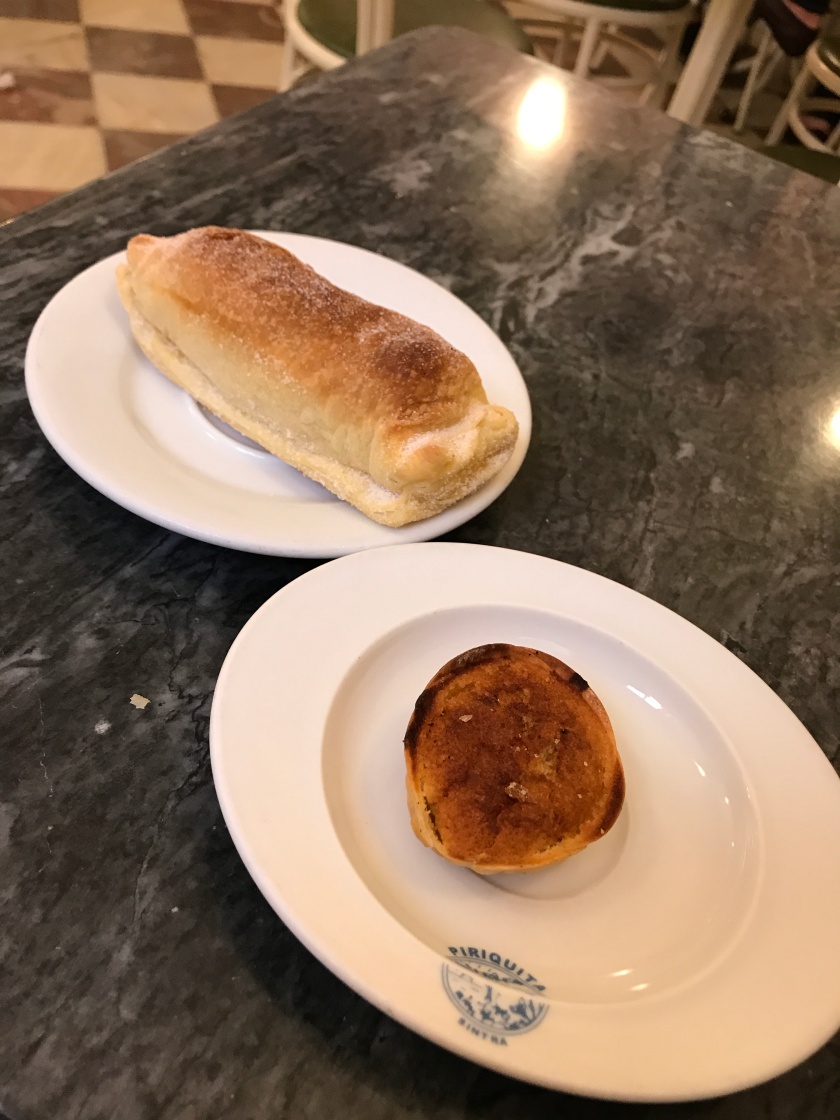 I’ve been previously warned about how crowded Sintra is, but I’m still pretty amazed at the sheer number of people all going to do the same thing.  The next stop on my list is Quinta da Regaleira, and it is absolutely mobbed with people, even though it is just coming up on 11am.  I’m still high from my castle adventures earlier in the morning, so not even the line gets me down, but it does eat into my allotted time, so once I get through it, I kick it into high gear again so I can cover as much ground as possible.  I open the map and quickly realize that even at my fastest pace, I can only afford to hit about 10% of this place, so I steer away from the main (read: crowded) attractions and spend my time dipping through the gardens in hidden staircases and off the path trails.  The gardens are intricate and expansive, with waterfalls, lakes, grottos, caves and everything in between.  The statues are especially breathtaking, and include a hall of the gods, and my particular fave, the lion {who does not concern himself with the opinion of the sheep}.  Sadly, my time here in Sintra is fast approaching it’s end, so I exit stage {garden} left and head back the the train station via the National Palace of Sintra and whatever this place is:

Back safely on the train, I attempt to grab some shut eye, but a woman and her two young boys post up next to me and the younger one is still learning spacial relations, so I abandon hope at a nap, open the blinds for him and switch seats so he can plaster his face against the window.  Once I hit the Oriente station, I plunge underground to take the metro the rest of the way home, because let’s face it… you haven’t mastered a city until you’ve conquered the subway.  I navigated my two line ride back to Cais de Sorde and slid into my home office chair taking only 14 extra minutes over my planned return – leaving just a few moments for my current Love Letter to you.

As far as Sintra goes, if you come to Portugal, do as I say and not as I do.  Make time for Sintra.  I’d say 4 days.  Visit the castles early to beat the crowds.  Take Tomás’ recommendations and besides Pena and Mouros, hit Palácio de Seteais, Chalet do Condessa, and Palácio de Monserrate.  Spend your afternoons on the coast at Praia da Ursa, Praia da Adraga and Praia Grande.  Spend an ENTIRE day seeing every corner of  Regaleira.  Eat your weight in travesserios.  Every day.  Don’t be an asshole like me.  Give Sintra it’s due.

One thought on “Sintra in 4 hours (or less)”

#unabomber shot
Being #vegan is the worst . . #vegantacos #veganpastor #veganpastortacos #eatvegan
Wine me, dine me and send me on my way. Fabulous early birthday dinner before my departure to CDMX!
<Train>ing Run . . #run #runbham #pmrun #runner #training #trainingrun #train
We did the thing. Did you? #vote . . @iryannelson
One day, Onewheel . . #onewheel @onewheel

Want to live a life like mine?  See if Remote Year is for you here

"Play Hard. Travel Often." Now that is a mantra I can get behind. Get my style and rep your city with a smooth 15 percent off using code KRYSTALPINO https://www.shopaviate.com/