Oh, my Lovers, are you in for a treat. I knew my Tomorrowland post would be one of epic proportions, but even in my wildest of Random imaginations, I never would have considered what an A D V E N T U R E Tomorrowland would actually be. There was bike drama (lots of it). I was an entourage. We got in a fight with a taxi driver. I got hit by a car. I’m battered, bloody, bruised, and flying home to Budapest on a delayed flight with a throbbing head and a black eye that’s growing by the moment, and somewhere between all of that I attended the most epic music festival in the world, danced to my hearts content (in the rain more than once) and forged more life long friendships. Let’s first answer the question that is burning in all of your Loving minds. Did I partake in mind altering substances to enhance my Tomorrowland experience? I hope I don’t lose any of your Love when I tell you that I did not, and instead fueled my weekend with double shots of Jameson and more sugar free Red Bull than any one human should consume, and as the events of the weekend unfolded, this further proved to be the correct decision. Brace yourselves for the Randomness that was: Tomorrowland.

For two weekends each July, nearly 180,000 people descend on the quaint town of Boom, Belgium to unite over music at one of the greatest festivals worldwide. This year, my first decision after joining Remote Year was to be one of those 180,000. As mentioned before, I’m travel weary from overloading (overloving?) my plate this month, and the night before we leave for the festival the crew gets together to celebrate the Russian Beauty that is Milana on her birthday in another dance filled late night eve that includes me running through an open fire hydrant and ruining the hair I had straightened just a few hours before. Despite the late, whiskey laden evening, I’m up bright eyed and bushy tailed in time to shower and make breakfast before our two hour flight to Brussels. Once we land, our overly gracious AirBNB host scoops us up at the airport and we join the crew that is already settled in. Hair, makeup (because, as Jen once told me, festivals are all about the makeup), then festival. Our host as provided us with bikes so we can get to the festival in about 10 minutes. The Princess Meilz, J Lee and I take off to dive into the madness headfirst. The festival itself is a gorgeous setting of circus themed stages placed throughout a massive park with trees, lakes and bridges. J Lee is a hit and made me get in every pic that was requested of her, so I have strong urges to scour Instagram #tomorrowland to see if I can actually find any of the entourage pics.We kick it off with Cederic Gervais at The House of Books, hit Alison Wonderland at The Garden of Madness, get some Mainstage on with Marshmello and Tiesto before hitting the other end of the festival for Paul Van Dyke on The Freedom Stage and, my personal fav, Seven Lions at The Rose Garden, where the #PIC saw me twirling my little heart out on the live feed. 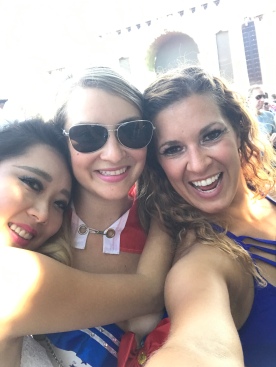 Dizzy from whiskey and dancing, we head back to the bikes for a whimsical ride back to our Boom digs. We uncouple our bikes, mount up to go, and J Lee’s bike doesn’t move – she’s got a tire lock on her bike and it has somehow gotten engaged – and the key is nowhere to be found. We look. And look. And L O O K. That sucker was G O N E. Meilz heads home ahead and I stay back with J Lee to walk the problem bike home. I have to pee before we go though, so I pop a squat, where I proceed to lose my ID – for the first time. Recovered in the most unsanitary of fashions, we proceed with my driver’s license in pocket, and I quickly realize this >2 mile walk will go much quicker if I clean this sucker up to my shoulders and carry it in a manner that all of my weightlifting coaching has prepped me for. This bike is heavy, and we are stopping nearly every five minutes so that I can rest and switch shoulders. After a good mile and a half, several switches, a scary detour into a park that is NOT as happy as Tomorrowland, we stop to rest and I realize my ID has once again escaped the confines of my person. This time we aren’t so lucky, so after J Lee retraces our steps without any success, we forge on just the two of us until Julian arrives like a knight in shining armor to help us with the last half mile. Lovers, usually I tell knights to ride the fuck on because I have my own white horse, but I was quite grateful in this instance. I’m just as grateful for the Jameson I bought at the duty free on the way in. 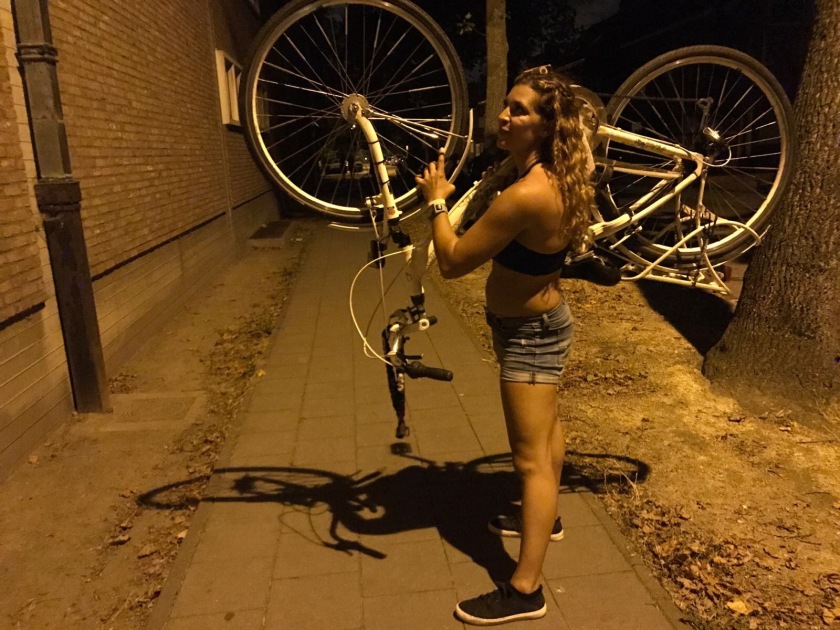 Day two starts with a family breakfast, hair, makeup, trampoline jumping and pregaming with champagne before grabbing a cab to the festival because fuck those bikes. Upon arrival we revisit the lost key area from the evening before and find said key in less than 90 seconds. Into the belly of the beast, it’s The Garden of Madness for Valentino Khan before Mainstaging it for Nervo, then down to The Freedom Stage for Sebastian Ingrosso – who I confused for Ferry Corsten – and the best set of the whole weekend. He killed it. We shoot over to The Arch for some Brennan Hart before Mainstaging Armin Van Buren and attempting to find the real Ferry Corsten. We eventually abandon our quest and head for the taxi line where we grab the only cab from a cashless festival that doesn’t take credit cards, a fact we don’t realize until he takes us to the wrong address for a second time. Once we finally manages to get us to the correct address, J Lee and I throw 20 Euro at him and bolt for the house as he screams at us from the street. Grateful again for the Jameo. 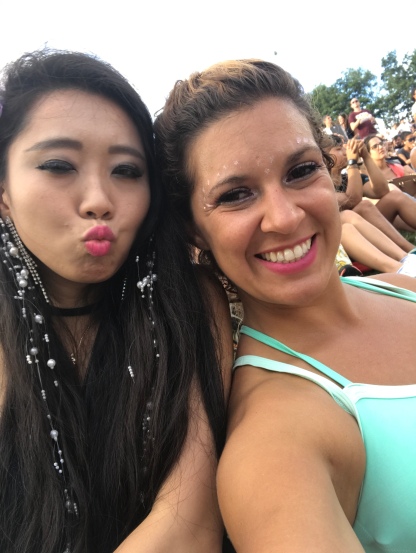 Day three we decide to give the bikes another shot after waiting out the rain, and we don’t get a block before I have to pull out my childhood bike mechanic skills and get J Lee’s chain back on. After washing my grease covered hands – I still have bike grease under my fingernails – we head for the Mainstage and dance in the rain to Yellow Claw and Oliver Helden. The next stop is the Freedom Stage for Nicky Romero, which is the only indoor stage and is extra packed due to the rain, but I don’t care about any of that as some overly excited (and rather short) guy behind us lifts me up on his shoulders for my favorite song “I Could Be The One”. Our escape from the overcrowded stage leads us to the Rose Garden, where I remain for the rest of the day with Jonas Blue, Feder, Robin Schultz and Klingande. This is also where I spend the most time with the non-Earhart Remotes that are at the festival and feel part of an even bigger family, The Remote Nation. Some of these guys have finished and are re-uniting. Some are in month 11, some month 4. We give each other pro-tips on cities and group dynamics between dance sessions and rain storms and bond over the mutual crazy that brought us not only to Tomorrowland, but also on this unbelievable journey. 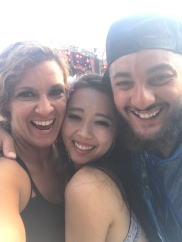 Leaving the festival, I get separated from the group and end up having to bike home alone. On a bike that’s too big for me. With no light. In the dark. And the rain. I’m hugging the curb when a car comes up beside me and swipes me just enough to throw me off course. The bike hits the curb and stops – I keep going – until the right side of my body makes contact with the sidewalk and my head smacks the ground with the most sickening crack I’ve ever heard in my life. I still attest that the driver had no idea, because they kept going and I would like to believe in the goodness of people – luckily my faith was restored by the car behind that did stop. I tried to assure them that I was ok, but when I turned into their headlights and the guy’s face went white, I confirmed with them that I was not actually ok. Luckily it was all scrapes and bruises and one knock to the skull with no concussion symptoms, so we locked the devil bike to a tree and they drove me back to the BNB where my fellow Earharts patched me up while – you guessed it – I calmed my nerves with some Jameson.

So there you go my Lovers. That’s your Specifically Random rundown of my weekend at Tomorrowland. I am battered and bruised and I have one hell of a shiner from my abrupt pavement encounter, but I wouldn’t trade one second of the shit how that was leaving Tomorrowland for any second of being in there. I have never smiled, laughed, and danced to my heart’s content so much in my life. Tomorrowland was my happy place, and all the things that happened when I left only served to tell me one thing: next year, I’m camping.

Guess what?  Pictures have been updated! Budapest, Prague, Tomorrowland and MORE!